The Business of Media

In this module, we discuss:

Digital media trends and consumption can be viewed through these primary lenses:

Let's take a look into each lens:

Content consumers have the following expectations for the media they consume, and how they consume it: 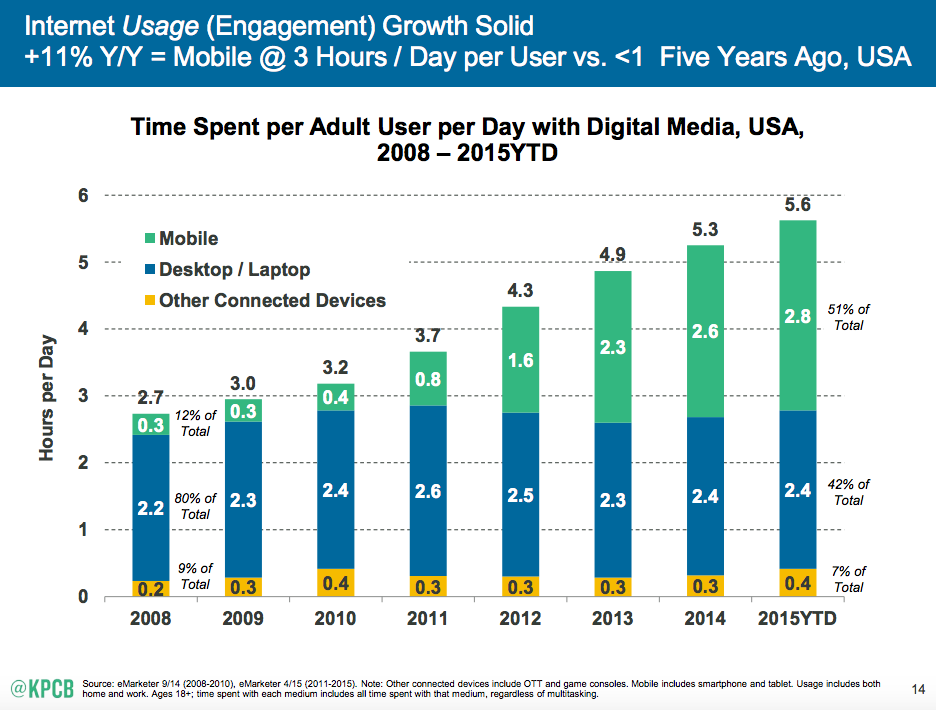 As digital media consumption on mobile devices continues to experience an upward trend, and since an estimated 2 billion consumers worldwide are expected to own a smartphone by 2016, it is important to take into account the following:

Therefore, mobile devices are not stealing eyeballs from desktop and laptop computers, which means they must be detracting attention from traditional media, like television, radio, magazines and newspapers.

While this course is not one in technology, it would be irresponsible to not call out the developments in digital media consumption -- most notably with wearables (e.g. the Apple Watch), the Internet of Things, and virtual and augmented reality.

In general, as more technologies through which we can consume content are developed — remember: content is everything we receive, consume and share on any device — the more segmented consumer attention will become, which in turn will further segment marketing strategies.

We know that today's consumers are seeking out individual websites less frequently, instead opting to receive content by having it delivered to them through email, social media, apps and the like.

That is precisely why the last handful of social media networks to make it big were designed as mobile-only or mobile-first platforms, such as Twitter, Instagram, Snapchat, Periscope, and most recently Anchor and musical.ly.

Facebook and YouTube have followed suit with formidable mobile apps of their own, while Pinterest (which has a mobile app but was really designed for optimal use on a computer) has seen engagement drop by 49 percent.

Among the keys to these mobile-only or mobile-first platforms are immediacy and on-demand accessibility, which reflect how digital media consumers want content.

Social search has also played a major role in how digital media consumers find content, which is why every major social media network has built-in robust search functions, Google has partnered with Twitter, and the social journalism platform Medium has enjoyed early success.

Not to mention, and irrespective of the Google-Twitter partnership, search engines have exponentially increased the percentage of social media content that appears in search results.

During Web 1.0 (circa 1995-2006), the Internet was largely viewed and used as a place to access information, whereas television, film and radio continued their dominance as the primary sources of audio and audio-visual media entertainment.

However, now that we are fully immersed in Web 2.0 (marked by the widespread use of social media), the Internet is becoming the primary source of audio and audio-visual media entertainment.

For example, Facebook and Snapchat each garner billions of video views per day, while the live-streaming app Periscope (which is owned by Twitter) gets more than 40 years worth of live video watched daily. (We already know how successful YouTube and Netflix have been at diverting eyeballs away from the television and movie theater screens.)

While banner ads, search engine advertising (like Google AdWords) and other digital paid media methods are still very much prevalent, online advertising has taken on a new dimension in recent years: native advertising.

Within native advertising, there are three primary classifications:

A report produced by BI Intelligence found that spending on native ads will grow to $21 billion in 2018, an increase from nearly $5 billion in 2013.

Yoav Arnstein writes on Facebook's Audience Network blog that native advertising "is less likely to lead to churn and ad fatigue, and drives higher retention rates (up to three times), eCPMs (up to two times) and click-through rates."


The Business of Media is presented by yarn, a collective of talent across media, journalism, marketing and design that helps brands create, distribute and monetize memorable content experiences.

For more insights and observations about the future of marketing, check out our publication and podcast.